Oliver’s vocal variety and general good humour front Mumbo-Jumbo. Recently described as “The nearest singer to Tom Waits that we have,” by Blues in Britain magazine, the new acoustic format give him the space and time to open up a voice that has a new timbre round every corner.

He was gobsmacked to be shortlisted in the British Blues Awards in the Instrumental category – and he wasn’t alone!

Oliver until recently also played in Stomp & Holler with Phil (and Chris) and his previous work includes fronting The Big Blues Tribe as well the Backdoor Blues Corporation and 3 Man Jam! has gained him an impressive reputation on the circuit. Chris is the epitome of a professional blues musician, Playing with Ian Parker, Steve ‘Big Man’ Clayton and from time to time on the road backing top US bluesmen Tommy McCoy, Paul Byrd, Jimmy Griswold and Big George Brock. He has also been a regular choice bassman with The Mighty Houserockers and The Bushbury’s.

Previously he fronted Memphis in the Meantime with Mark Shaw (who wrote Rocket Song and was previously a member of Mumbo-Jumbo) and is also well known on the blues circuit as the bass player with Parker’s Alibi and other groups too numerous to mention. 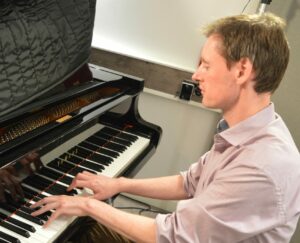 With the dexterity and intensity of two spider crabs on heat, Richard’s hands have darted over the ivories in a frenzy for over two merry decades. Thus far he has resisted the temptation to give it all up to become an office clerk and managed somehow to claw an existence from music.

Jazz/blues got the better hand and he was soon playing with various bands/outfits, hot-footing the length of the country from dingy social clubs to swanky hotels. He’s performed gigs with a variety of people from Digby Fairweather, violinist Ralph Allin, and been on tour with the King Pleasure which culminated in performances at The Umbrian Jazz Festival, CBSO centre, Symphony Hall and other salubrious places. He has recorded on various albums including two of his own consisting of newly penned pieces and arrangements. Richard also performs regularly at festivals across the country with the UK’s only successful tribute to Jamiroquai, ‘Space Cowboy’.

But they do say that out of adversity comes opportunity and this couldn’t be further from the truth in him joining forces with Mumbo Jumbo. The meetings of minds has been quite the epiphany and the start of a voyage together into the realms of the improbable and indescribable.  www.richkeys.co.uk Adam is the fourth member of the team running the sound, lighting and general support on all the rural touring, festival and theatre gigs. He is particularly proud that everyone comes up to him at the end of the gig and tells him how marvellous the lighting show is. He has been a sound engineer for many years working on everything from touring bands to school performances.  He is currently undefeated in professional wrestling.